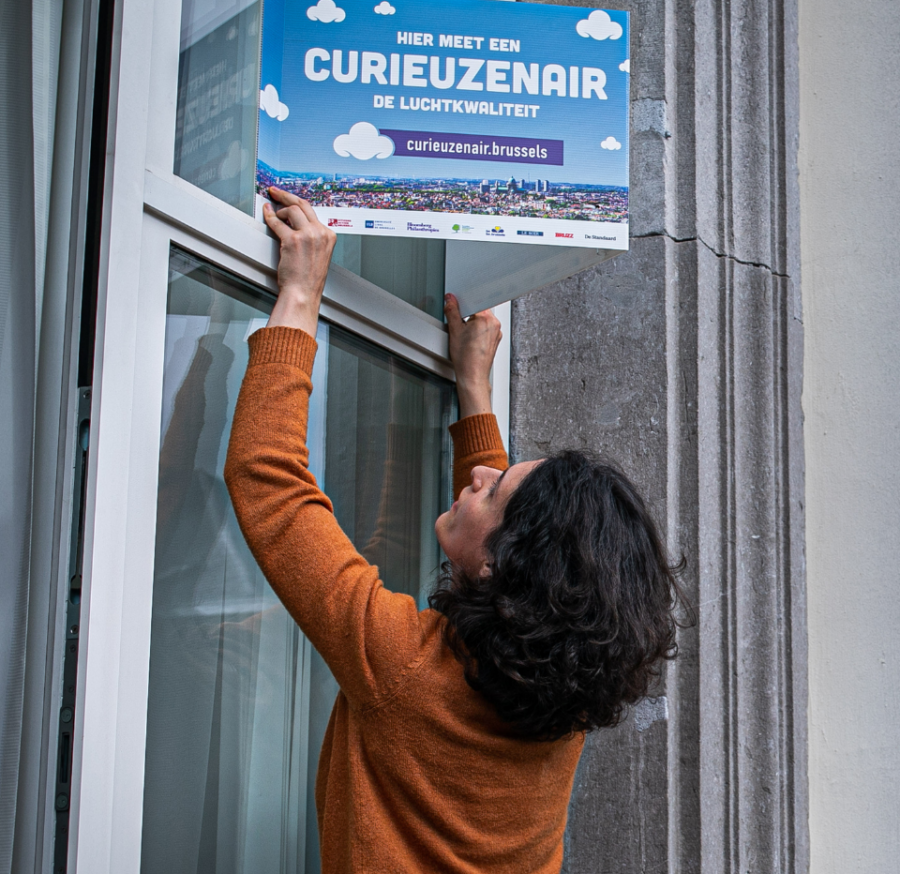 Between 25 September and 23 October 2021, 3.000 Brussels citizens participated in CurieuzenAir, the largest ever citizen science project on air quality in our capital. For one month, citizen scientists mapped the concentration of nitrogen dioxide (NO2) — a key indicator of air pollution caused by traffic — in their streets via measuring tubes on the facades of their homes. The project resulted in a unique dataset showing the impact of road traffic on air quality in Brussels in great detail. Results range from ‘excellent’ to ‘extremely poor’ air quality across Brussels, with a stark contrast in air quality between socio-economically vulnerable neighbourhoods and green, well-off ones. CurieuzenAir also brings good news: the data show that air quality in Brussels has improved considerably in recent years.

Significant and striking differences across Brussels

On the interactive dot map, each measuring point was assigned a colour corresponding to the value measured. While looking at the dotted map, it is striking that the air quality differs greatly from neighbourhood to neighbourhood, and even from street to street. From blue dots (0-15 µg m-3; ‘very good’) to a number of jet-black dots (>50 µg m-3; ‘extremely bad’), the CurieuzenAir dataset makes it clear that these differences are explained by emissions from Brussels traffic.

The lowest NO2 concentration of 6.2 µg m-3was measured in the middle of the Sonian Forest, a location spared from traffic emissions. The lowest NO2 concentration in a residential area (8.1 µg m-3) was measured on a façade in the Vogelenzangstraat in Anderlecht. This is a remarkable measurement for an urban environment, where measured values below 10 µg m-3 are usually less frequent. This measurement value indicates that there are also residential areas in Brussels with very good air quality.

At the other end of the spectrum, there are also outliers. The highest value (60.5 µg µg m-3) was recorded along the busy Nieuwpoortlaan, and there are also measuring points along the inner ring road that exceed the limit of 50 µg m-3. These high values are explained by a combination of heavy traffic and little air circulation due to high-rise buildings. Olivier Brasseur, air quality expert at Brussels Environment, explains: “The highest nitrogen dioxide concentrations are reached in places with heavy traffic. These concentrations are amplified by a “canyon effect”, the presence of buildings on either side of the street, which causes the pollutants to linger in the street, as it were. Surprisingly, there are different NO2 concentrations within one and the same street. This can be explained by the structure of the street, which gives more or less free rein to the wind in some places. In addition, stop-and-go traffic at intersections and traffic jams during the morning and evening rush hours cause increased emissions and high peaks. This translates into red and purple dots on the CurieuzenAir dot map.

Thanks to the large volume of CurieuzenAir data, Curieuzenair can estimate NO2 exposure for the entire population of Brussels. CurieuzenAir found that 1.4% of Brussels citizens – 17,000 people – are exposed to air quality exceeding the 40 µg/m3 European air quality standards. Additionally, 98.4% of the population – 1,200,000 inhabitants – live or work in areas exposed to pollution above the World Health Organization’s new threshold value, above 10 µg m-3, showing the broad impact of air pollution on the community’s public health.

“It is definitely not pleasant to hear that you live or work at a red location,” says Professor Filip Meysman (UAntwerpen), coordinator of CurieuzenAir. “But that is also the purpose of our research: to make hotspots of air pollution visible and ensure that local policy makers can improve the traffic situation. On the other hand, we are surprised to see that this is a relatively small percentage. Only two years ago, it was estimated to be around 10%, and ten years ago, even half of the Brussels population was above the norm. The official measuring stations of Brussels Environment show the same declining trend. The air quality in Brussels is therefore clearly improving.” The researchers see a number of important explanations for the recent improvement. The corona effect caused telecommuting and thus less traffic during the measurement period. But the increasingly clean car fleet, higher bicycle use and the low-emission zone also play a role, and these are lasting effects. The CurieuzenAir data show that such measures do improve the quality of life in a large city.

Despite the encouraging measurement results, action is needed to improve air quality in the city. In September 2021, the World Health Organisation presented a new threshold value: above 10 µg m-3, the first health effects are noticeable. And that is quite sobering: based on the CurieuzenAir data, 98.4% of the population – or 1,200,000 inhabitants of Brussels – live or work in areas exposed to pollution above this health standard.

Alain Maron, Brussels Minister for Climate Transition, Environment, Social Affairs and Health: “CurieuzenAir is a great example of the importance of citizen science. Thanks to all the citizens that took part in the project, we collected unprecedented results on air pollution in Brussels, which help us to better understand the problem in our city. While we see that the situation is slowly improving, the concentrations measured still remain unacceptable, and call for urgent, in-depth action. We need to make sure that everyone in the city, wherever they live and whatever they earn, get to breathe a clean and healthy air.”

“We know that you can’t manage what you don’t measure—and this valuable data and research will enable the Brussels-Capital-Region, Brussels Environment, and civil society to combat this air pollution crisis,” said Antha Williams, who leads environment programs at Bloomberg Philanthropies. “Tackling air pollution in Brussels will save lives, and will especially benefit the most vulnerable, including children and the elderly who are most susceptible to the harmful effects of poor air quality.”

Good air quality is important for all inhabitants of Brussels

The CurieuzenAir dataset provides a very detailed picture of air quality in the various districts of Brussels. The NO2 concentrations show remarkable differences between neighbourhoods, streets and sometimes within the same street. Researchers from Université libre de Bruxelles placed the CurieuzenAir data alongside socio-economic characteristics of the various neighbourhoods. “What is striking is the difference in air quality between the orange and yellow dots in the centre and the blue-green periphery of Brussels,” explains Dirk Jacobs, full professor in Sociology at ULB. “The three neighbourhoods with the best air quality in the region are located in Uccle and the three neighbourhoods with the highest NO2 concentration are found in the city centre and near the inner ring road.” Neighbourhoods with a higher population density tend to score worse in terms of air quality. Moreover, the Curieuzenair data shows a clear link between income and air pollution exposure: the more deprived neighborhoods, the worse air quality is. “Ironically, this also means that in the neighbourhoods where car ownership per household is lower, the air quality is nevertheless worse because of the impact of nearby traffic”.

“The results from CurieuzenAir show that the health effects for the people of Brussels are unevenly distributed. We are not all in the same boat,” says Raf Pauly of BRAL, Brussels’ urban movement, and a co-initiator of CurieuzenAir. “But the measurement result in your street is not equal to your own daily exposure. We only spend part of our time at home. People from the blue-green periphery also go to study, work or shop in the Vijfhoek. So we all have an interest in seeing the air quality across the whole of Brussels improve significantly and we need to work hard to achieve that.”

CurieuzenAir is an initiative of the University of Antwerp, urban movement BRAL and Université libre de Bruxelles, in close cooperation with Brussels Environnement, De Standaard, Le Soir and BRUZZ. This program is supported by Bloomberg Philanthropies’ Brussels Clean Air Partnership.